Devon’s winning streak in the WECU Under 160 competition stretches back a remarkable 20 years, with our opponents Cornwall the only county yet to have held the Wayling Cup (first contested in 1951). The early signs were that this year could be different.

It was very difficult to get a team together for some reason, and when we lost two players a week beforehand it was a struggle to replace them. Fortunately Bob Jones and Richard Smith stepped in and completed our 16. That turned out to be vital, as Cornwall had put together their strongest side for decades; on paper the two sides were evenly matched with just a few grading points in it.

Unfortunately for the Cornish, two of their players didn’t turn up, handing us a very significant advantage. Martin Quinn volunteered to return home early and Charlie Howard sat out the half an hour required to confirm a victory by default.

We held our two point lead for most of the match, with wins being immediately cancelled by losses. At  6.5-4.5 it seemed very possible that the match would finish tied, but Sean Pope and then Meyrick Shaw both managed to extract a win and get us over the line. The last game to finish was perhaps the most interesting, with debutant Danilo Wasques an exchange down but having a wall of pawns advancing on his opponents king. Eventually his pawns induced the return of that exchange, followed by a whole piece, and it was all over.

We now proceed to the national stages in April, where we will have a good chance of progress if we can get our strongest side out.

Please see below for the full match sheet. 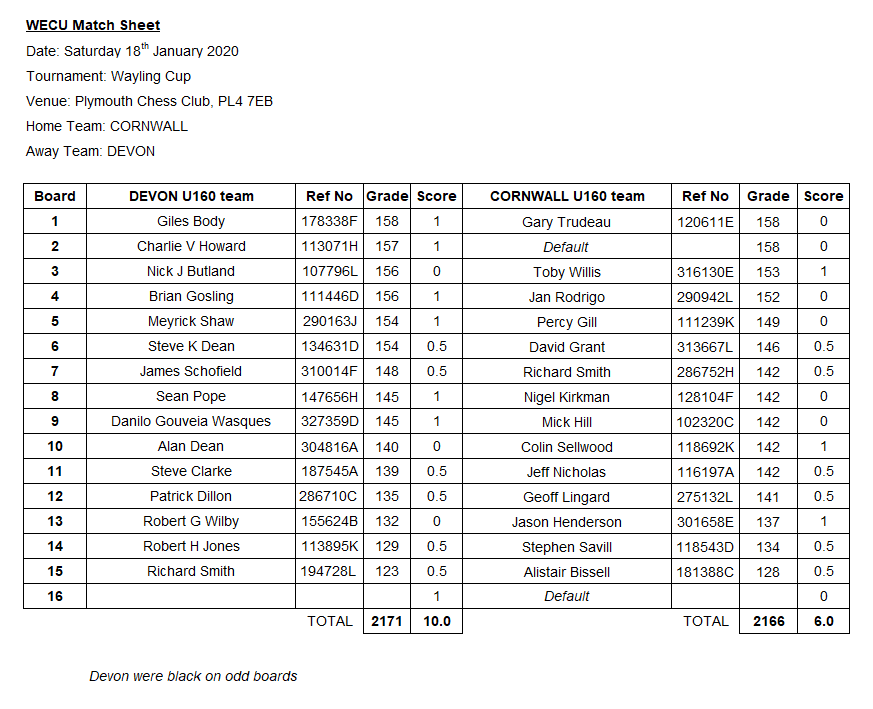