This match was notable for two players making their Devon debut: Jacquie Barber-Lafon and Harriet Haslehurst. This is certainly the first time we’ve had female representation for some years.

The fixture got off to a good start with Nicky Bacon forcing his opponent into a passive position and finishing him off after little more than a hour. Dad Julian soon followed with a quick draw.

At the halfway mark Steve Clarke’s attack induced his opponent to blunder his queen, but Charlie Howard had been swamped by pawns, leaving the score 2.5/1.5.

We traded wins from Martin Quinn with a loss by Peter Halmkin, Steve Dean and Tony Hart added draws, and then a win by Jacquie Barber-Lafon extended our lead to 5.5/3.5.

With the time control approaching, Brian Gosling and Joshua Blackmore both won to extend our lead, and then Harriet Haslehurst’s opponent ran out of hope and resigned to secure the match. 8.5/3.5.

Four games were still in play but Devon were clearly winning all of them, and Matthew Wilson, Meyrick Shaw (despite some disturbing time trouble), Steve Murray and Rob Wilby all converted to finish the match 12.5/3.5.

Our team was strong (not far off teams that have won the County Championships in recent years), but this was rather better than the result predicted by the grade differential.

Thanks to everyone who played, and especially those who stayed behind at the end to put away.

Please see below for the full match sheet. 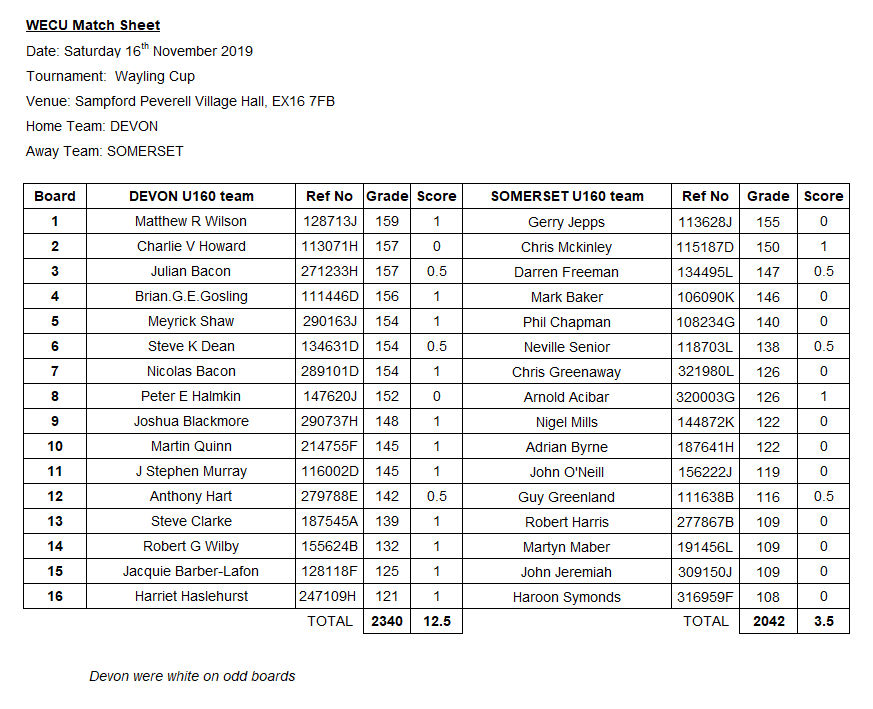